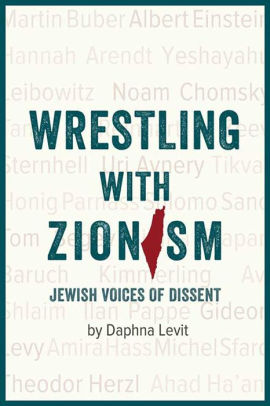 Wrestling with Zionism can be purchased from Interlink Books or from Amazon.com.

As Levit describes it, “the immediate threat of annexation is outrageous but not unexpected; it is merely an augmentation of an institutional process that Israel began as early as 1948 — of a continued dispossession of Palestinian land with the world watching, complicit in its silence to the theft.”

Levit was born in Israel, served in the army, and received undergraduate degrees in linguistics and literature from Tel Aviv University.  She discusses her book on rabble.ca. Rabble blogs are the personal pages of some of Canada’s most insightful progressive activists and commentators.

A detailed review of Wrestling with Zionism was published by Steve France in Mondoweiss: https://mondoweiss.net/2020/12/the-land-will-sink-beneath-your-feet-a-century-of-jews-wrestling-with-zionism/. The review is entitled ‘The land will sink beneath your feet’ — a century of Jews wrestling with Zionism. France reports that “The book is a treasure trove of anti-Zionist zingers.”

← Against the IHRA definition of Anti-Semitism Avrum Burg →